Northwestern Magazine features Yongchao Ma, NU, who, together with Chuan He, UChicago, are recipients of a CBC Catalyst Award which supported discovery of how the molecular mechanism of behind the fragile X syndrome, a form of autism 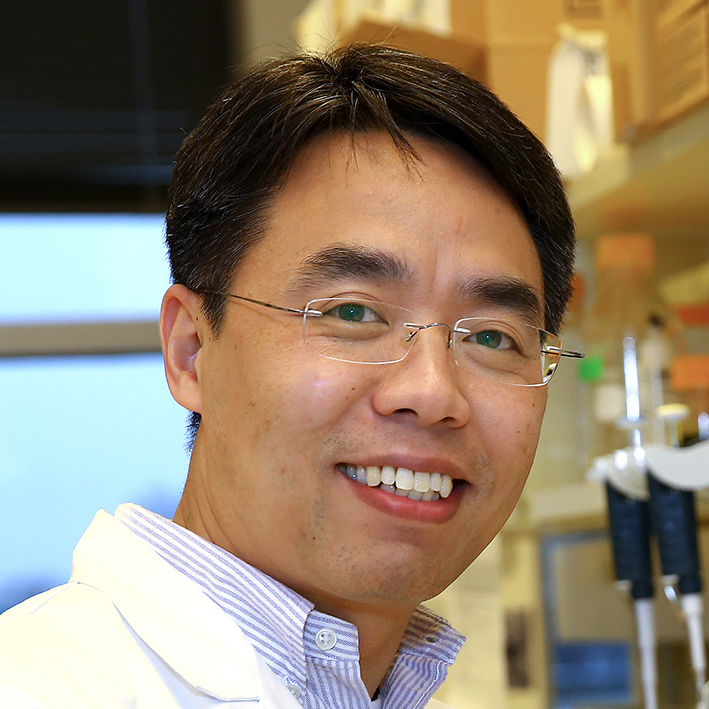 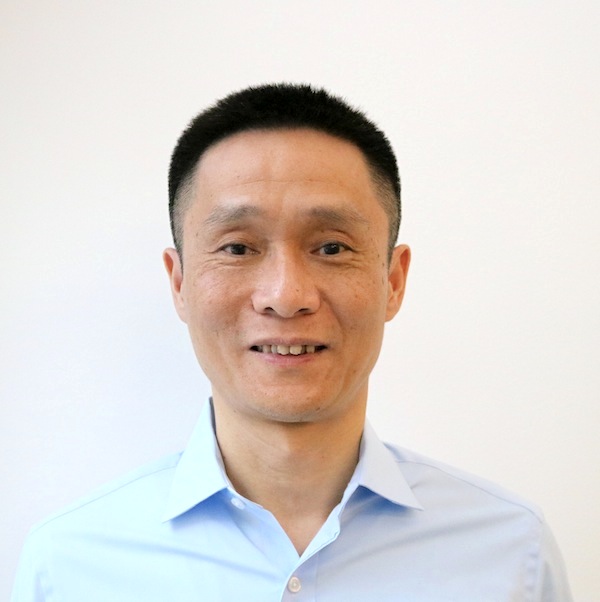 Fragile X syndrome — a type of autism — is the most common inherited intellectual disability in children. Previous studies have pinpointed a culprit gene, called FMR1, which plays a critical role in causing slower brain development in children carrying the FMR1 mutations as compared to the healthy population. In 2016, Yongchao Ma, NU, who’s lab investigates the regulation of neuron function in development and disease, joined forces with Chuan He, UChicago, a world expert in uncovering the role that dynamic and reversible RNA and DNA methylation play in gene expression regulation. Ma and He won a CBC Catalyst Award — given for novel, high-risk/high-reward projects with transformative potential — and the results of this collaborative work have recently been published in Cell Reports.

The Catalyst team discovered that the FMR1-encoded protein FMRP acts as a “reader” of the methylation of RNA on N6-adenosine, called m6A. FMRP facilitates transport of m6A-modified RNA form the nucleus to the cytoplasm where the RNA is subsequently translated into a protein. However, if FMRP is mutated or missing, as seen in fragile X syndrome, m6A-RNA cannot leave the nucleus. Such nuclear accumulation of many mRNAs encoding proteins that are critical for proper differentiation of stem cells into neurons in the developing embryonic brain results in developmental delays, as observed in a mouse model.

These important new findings shed new light on the mechanisms that hinder proper differentiation of neurons and growth of the embryonic brain. A natural question could be raised whether targeted gene therapy could one day help overcome the “molecular block” and nip in the bud the development of autism and other diseases that depend on FMRP interactions with m6A-RNAs.

The CBC congratulates the CBC Catalyst team and all other authors involved in the current study and appreciates being recognized for partially funding the published work.

Enjoy the article from the NU Magazine which is reposted below. 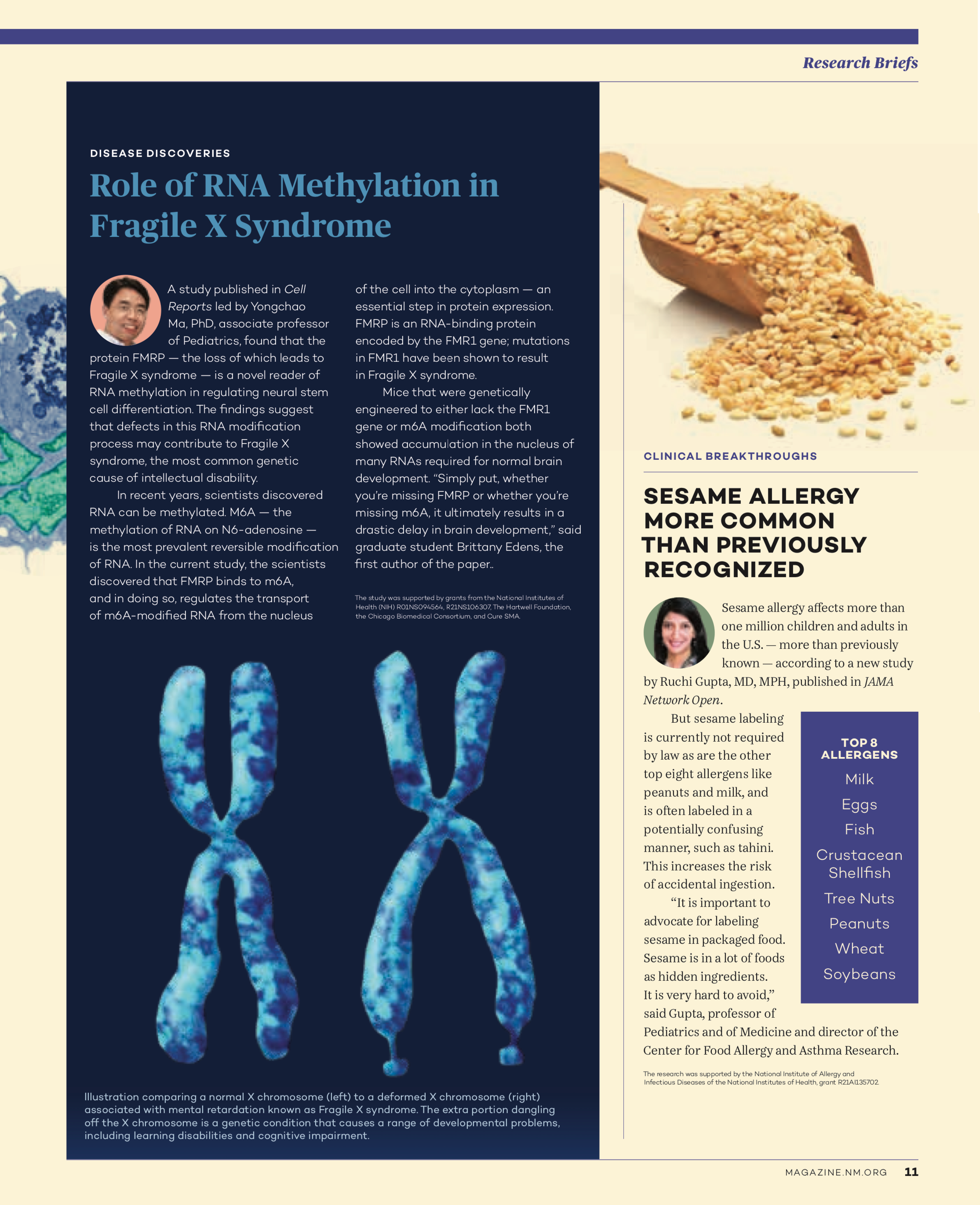 Image: Illustration comparing a normal X chromosome (left) to a deformed X chromosome (right) associated with mental retardation known as Fragile X syndrome. The extra portion dangling off the X chromosome is a genetic condition that causes a range of developmental problems, including learning disabilities and cognitive impairment. (Courtesy of the NU Magazine.)

A study published in Cell Reports led by Yongchao Ma, PhD, associate professor of Pediatrics, found that the protein FMRP — the loss of which leads to Fragile X syndrome — is a novel reader of RNA methylation in regulating neural stem cell differentiation. The findings suggest that defects in this RNA modification process may contribute to Fragile X syndrome, the most common genetic cause of intellectual disability.

In recent years, scientists discovered RNA can be methylated. M6A — the methylation of RNA on N6-adenosine — is the most prevalent reversible modification of RNA. In the current study, the scientists discovered that FMRP binds to m6A, and in doing so, regulates the transport of m6A-modified RNA from the nucleus of the cell into the cytoplasm — an essential step in protein expression. FMRP is an RNA-binding protein encoded by the FMR1 gene; mutations in FMR1 have been shown to result in Fragile X syndrome.

Mice that were genetically engineered to either lack the FMR1 gene or m6A modification both showed accumulation in the nucleus of many RNAs required for normal brain development. “Simply put, whether you’re missing FMRP or whether you’re missing m6A, it ultimately results in a drastic delay in brain development,” said graduate student Brittany Edens, the first author of the paper…

The study was supported by grants from the National Institutes of Health (NIH) R01NS094564, R21NS106307, The Hartwell Foundation, the Chicago Biomedical Consortium, and Cure SMA.

This research was supported by grants from the NIH (R01NS094564 and R21NS106307 to Y.C.M.; R37NS047344, U19MH106434, and P01NS097206 to H. Song; RM1HG008935 to C.H.; and R01MH105128, R35NS097370, and U19AI131130 to G.-l.M.); the Simons Foundation Autism Research Initiative (SAFRI) to H. Song (575050); Cure SMA and The Hartwell Foundation (to Y.C.M.); and the Chicago Biomedical Consortium (to Y.C.M. and C.H.). C.V. was partially supported by an NSF predoctoral fellowship and NIH T32GM007445. We thank Dr. Stephanie Ceman for providing WT and ΔNES Fmr1 constructs, Dr. Anis Contractor for providing Fmr1 KO mice, and Dr. Xiaoxi Zhuang for sharing Mettl14f/f mice. We thank Dr. Tian Shao for technical assistance in validating anti-FMRP antibodies. The research reported in this manuscript was made possible in part by the services of the Keck Biophysics Facility and the NUSeq Core Facility, which is supported by the Northwestern University Center for Genetic Medicine, the Feinberg School of Medicine, and the Shared and Core Facilities of Northwestern University’s Office for Research. C.H. is a Howard Hughes Medical Institute Investigator. Y.C.M. is the Ann Marie and Francis Klocke M.D. Research Scholar supported by the Joseph and Bessie Feinberg Foundation.

June 4, 2019
▸ Introducing Jump-Seq
Lulu Hu, a postdoc in Chuan He’s lab at UChicago and a recipient of a CBC Postdoctoral Research Award, publishes the results of her project in Journal of American Chemical Society